The Rusty Bucket has not come home to BHS for five years, and finally the team has claimed it with a winning score of 16 points.

Over the past few decades, the BHS Demon Cross Country team has had success in winning state titles and local meets consecutively. Since 2015 that winning streak has slowly faded, but this year the Demon Harriers have reclaimed the Rusty Bucket, a traditional and local meet held at McDowell Dam for decades, for the first time in five years.

After this win, the Demons can boost their confidence for larger meets against even more competitive teams. Senior Noah Cowley is a leader on the squad and hopes that this small win can amplify the energy of the team as they run forward into the season.

“So far, it just sets us above the other local teams, nothing too crazy,” Cowley said. “Going forward, we look to go against bigger competition with teams such as Williston, which will be our biggest challenge this year.”

This year will be slightly different for most of the returning athletes, with the loss of several seniors, one who was a two time defending state champion and encouraged the Demons to carry their winning tradition.

“Losing a senior like Sean Korsmo was definitely a big hit on the team, however, he has led by example for years, and we have all learned from him,” Cowley said. “The leadership on the team now comes not from one person, but from everybody holding everybody else accountable.”

Junior Brady Korsmo is another veteran runner who placed second at the Rusty Bucket. Being a strong leader is the key to success when it comes to running as a group.

“I think about half of our team is freshman,” Korsmo said. “Without them, we would barely have enough for a team. I guess it also holds the older guys accountable because they do what we do so we have to lead by example.”

Another big difference between previous years, is the departure of longtime Coach Darrell Anderson who was a multiple state winning coach, and being replaced by Scott Reichenberger.

“[Reich] kinda worked his way into the season, having us start with shorter runs and building up,” Korsmo said. “Anderson had us jump into our season right away. The only difference was that I was itching to do more under Reich making me ready for the season.”

Reichenberger now is in charge of both teams this year and has been at the helm of the growth and development of this year’s young team.

“The goal for both teams is to compete for a state title,” Reichenberger said. “The girls will be in a battle with several teams including Williston and Davies. The boys team began the season unranked and have been currently improving on a weekly basis and are currently ranked third. The boys team looks forward to the challenge of racing Williston, Red River and Davies.”

Through different training regimens and new running routes, the team is coming together and getting better each week. Following the Rusty Bucket, even larger meets await the Demon runners.

“Williston is ranked first and they are a strong team, but the boys are improving and starting to believe,” Reich said.

Overall starting strong this year means everything for the Demons, and sets the tone and standard for upcoming athletes.

“The history of the Rusty Bucket dates back to 1985,” Reich said. “A rusty bucket with the winning team name and year was written on the bucket and the tradition has continued for almost 40 years.” 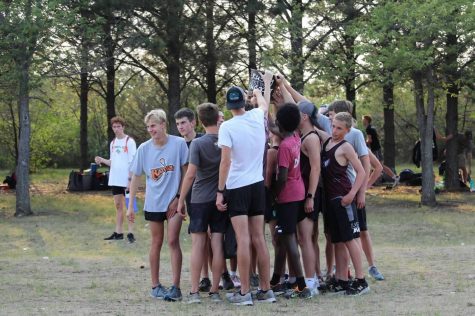