A new knee for Yancey

After many years of pain, BHS gym teacher Sherry Yancey is getting a total knee replacement. 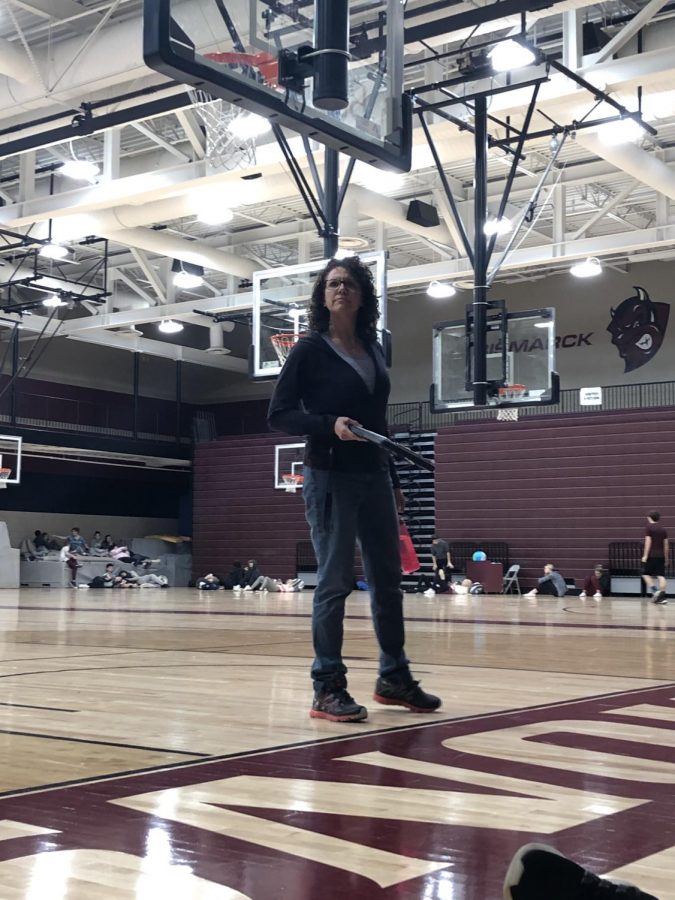 Last Day. BHS gym teacher Sherry Yancey is wrapping up her last day at work before her procedure. Her students were sad to see her leave. “[Gym class will be] more sad just because she’s not there to motivate everyone,” BHS sophomore Dominic Jochim said.

For the past eight to nine years, BHS gym teacher Sherry Yancey has been struggling with knee pain. After steroid injections ceased to provide relief, Yancey had to look into other options.

Yancey initially tore her ACL when she played basketball in college. After rehabbing, she played with a brace but eventually tore it again.

“Because my knee never ‘gave out,’ my doctor said I didn’t need to fix the ACL,” Yancey said. “However, for 34 years, it has been a sloppy joint [had], and that caused the cartilage to wear away and expose the bone.”

As a gym teacher, having knee pain caused Yancey’s job to be difficult. Activities that would have been easy caused her pain.

“I was unable to demonstrate for my students what I wanted them to do,” Yancey said. “When a student’s partner was absent, I couldn’t jump in and play.”

After years of trying to manage the pain, Yancey decided to have a total knee replacement.

Yancey planned to be gone for six weeks, but because of Distance Learning, she is able to continue teaching. She had originally planned to have a sub during that time, but now, she has no need for one.

“[The sub] followed me through an entire day and watched what I did,” Yancey said. “I had no idea how much we do as teachers until I tried to tell someone how to do my job.”

Recovery for Yancey’s procedure will take a while. Yancey looks forward to returning to Crossfit once the recovery process is complete.

“I know there is a lot of physical therapy, icing and stretching involved,” Yancey said. “I’ve also heard the therapy can be quite painful.”

When Yancey left for her procedure, she expected to be back within six weeks. However, COVID-19 has changed her plans regarding returning to school.

“I’d hoped to have minimal pain and swelling when I returned and to be able to fully teach my content,” Yancey said.

Although it may be difficult for Yancey, her students know that she will eventually be able to recover from this procedure.

“I think that it will affect her in many ways. There’s no doubt it’s going to be a long recovery road back,” BHS sophomore Dominic Jochim said. “But I know Yancey will push through and fight on just like she pushes her kids in class.”

According to BHS sophomore Rebecca Riepl, Yancey provided much encouragement for her students.

“I miss the motivation and the push she provided for us,” Riepl said. “She never let you give up, she would always push us to our limits, and that’s something that’s hard not to miss.”

When asked what she would miss most about being gone for her total knee replacement, Yancey said it is her students.

“I have the best classes ever,” Yancey said. “All my students are positive, kind, responsible and just plain fun to be around.”