With the outbreak of COVID-19, this year’s Race for Parkinson’s will be held virtually. 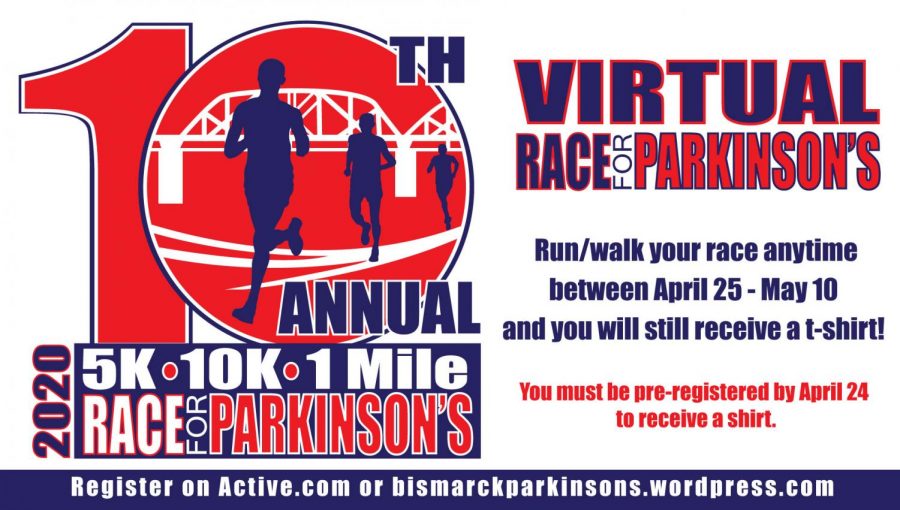 Online Race. The 10th race for Parkinson’s is being held online this year. Participants can complete their own race individually between April 25 - May 10. “[I participate for] bringing awareness to Parkinson’s and getting some exercise at the same time,” Race for Parkinson’s participant Katie Vranicar said.

The 10th annual Race for Parkinson’s will not be held in the same way as it previously was because of COVID-19. This year, the race has been made virtual.

Founded in 2008, the Bismarck Parkinson’s Support Group (BPSG) helps families and patients to be better educated about Parkinson’s Disease as well as provides support for those affected by it.

“BPSG is a group of people with Parkinson’s Disease, their families, friends and caregivers who share an interest in educating themselves about the disease and developing a greater public awareness of Parkinson’s,” BPSG board member Kory Schauer Hagler said.

The Race for Parkinson’s was founded 10 years ago when BPSG was trying to figure out a way to raise money for the group.

“My mom, Linda Wagner, had just taken over as the facilitator for the support group, and they were trying to think of a fundraiser for the group,” Race for Parkinson’s director Sara Kelsch said. “I had just gotten back into running and suggested a race.”

The race is an important source of funding for the BPSG to hold events for their cause.

“The funds raised from the annual race are used to help educate the community about Parkinson’s disease through the monthly support group meetings and we also coordinate a Parkinson’s Seminar every September,” Schauer Hagler said.

However with the recent pandemic, BPSG still had the desire to hold the race in a way that people could still practice social distancing.

“We still wanted to have the race to continue with the tradition,” Kelsch said. “In addition, people are looking for ways to not only be active, but to give back as well.”

One downfall of the race being virtual is that the participants will not be able to gather together for meaningful moments this year.

“Typically, it was a pretty moving time when the one mile walk took place as that is when many people diagnosed with Parkinson’s and their families would walk together,” Kelsch said.

Another impact of the race being virtual is on the number of participants.

“We expected our numbers to be way down,” Schauer Hagler said. “But we wanted to continue with the race even though we couldn’t all be together like we have in the past.”

In addition, the participants will not have each other for support while running.

“It will be different running without the encouragement from people around me,” Race for Parkinson’s participant Katie Vranicar said.

For the virtual Race for Parkinson’s, participants receive a participation t-shirt and are expected to run 10k and post a picture of themselves doing so.

“We hope people post pictures of themselves completing their individual race and that it entices others to participate,” Kelsch said.

Despite the difficulties of this time, the Race for Parkinson’s continues to be a way for people to remain active and support those affected by Parkinson’s Disease.

“We’ve had a lot of really positive comments so far. I think our numbers will be down, but with everything going on, we are just happy to have people participate if they can,” Kelsch said.